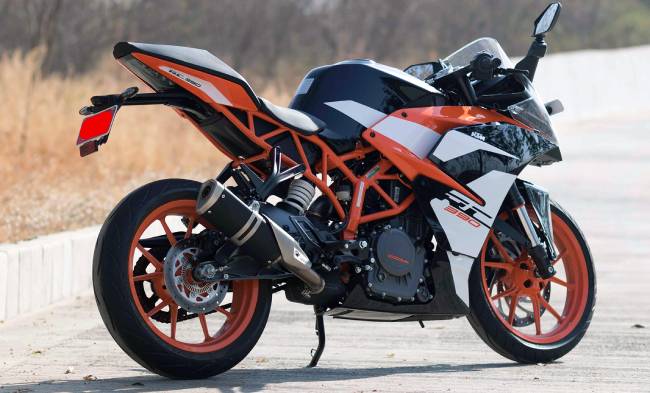 The latest version of the KTM RC 390 has recently been spotted testing overseas with an all-new design for 2020. The front end design gets a fresh new look and seems to be larger than before. Similarly, the fuel tank appears to be bigger, while a slightly elongated windscreen covers the entire front fascia of the RC 390 along with its headlights. We could also expect that the updated version to borrow the 390 Duke’s full-colour TFT instrument console. Furthermore, even though the supersport gets the same engine as the 390 Duke, we could expect that the new version to put out more power compared to the current model.

Additionally, the updated KTM RC 390 is suspected to come with a better WP suspension setup and brakes which would further improve the bike’s handling. The New version of the RC 390 was recently launched with a new paint scheme – Black and Orange, along with features like wider mirrors, more comfortable seat, adjustable levers, and a ride-by-wire throttle. The current RC 390 comes with twin projector headlamps with Automatic Headlamp On (AHO), LED tail light & turn signal lamps, and an all-digital instrument console that includes a clock, trip meter, odometer, and distance to empty indicator. The KTM RC 390 is powered by a 373.2cc, single cylinder, 4-stroke, liquid-cooled, BSIV-compliant engine that churns out a max power figure of 43.50PS @ 9000 rpm and a max torque of 35Nm @ 7000 rpm, mated to a 6-speed gearbox.

The company claims that it can reach a max speed of 179kmph, return a mileage of 25kmpl, and the fuel tank has a total capacity of 10 litres. It comes fitted with 17-inch alloy wheels and tubeless tyres. Braking duties are handled by a 320mm front disc and a 230mm disc at the rear with dual-channel ABS. The suspension setup comprises of upside-down forks and a monoshock at the rear, both from WP. The RC 390 is available in Nepal for Rs. 8,19,900. It competes against the likes of the TVS Apache RR 310, Kawasaki Ninja 300, CFMoto 400 NK, Bajaj Dominar 400 and the Benelli TNT 302R.

Features and Safety in KTM RC 390