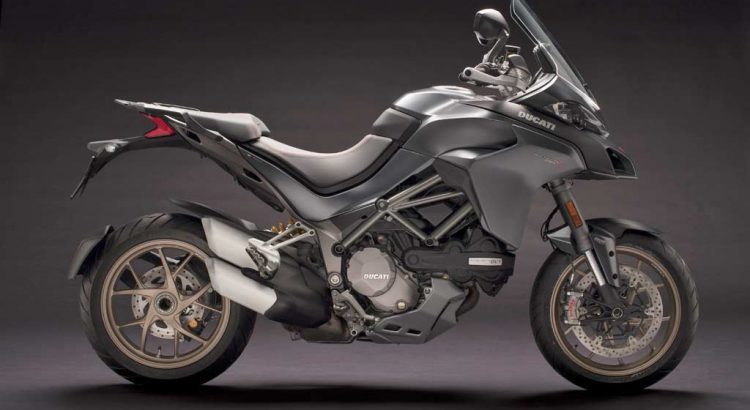 Ducati has launched Multistrada 1260 which is a motorcycle that has been designed to traverse continents, and is equipped with top components to enhance its off-road and touring capabilities. Let’s get into the detailing of this bike. 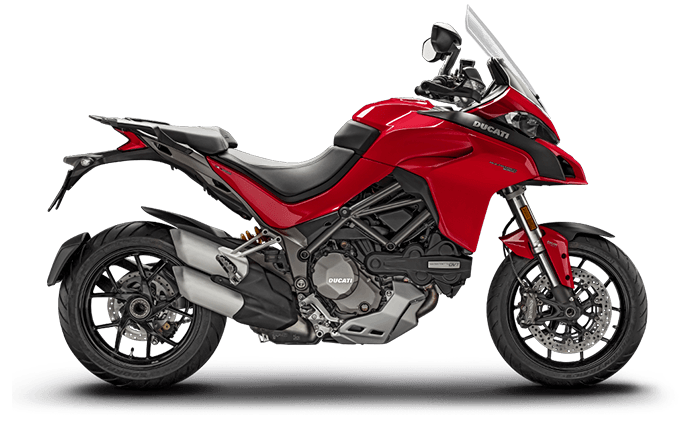 Ducati’s Multistrada 1260 has arrived with enough improvements in 2018 to qualify as an all-new motorcycle. The adventuresome “MS” sees the next phase of its progression with a new Testastretta engine, new electronics to help manage it and a new chassis to hold it all together. Ducati’s variable valve timing feature makes an appearance to help deliver 85-percent of the available 95.5 pound-feet of torque at 3,500 rpm for a much fatter mid-range than its predecessor. Traction control, wheelie control and ABS come with the standard package to be considered at.

The MS 1260 serves as the basis for the more specialized adventure models further up the chain. Cast rims and street tires indicate a clear bias toward the blacktop, and this sets the tone bright and early. The front fender comes heavily bobbed with a fetching black-and-red finish that ties in nicely with the rest of the bike

The headlight clusters seem to be extended by the handguard-mount turn signals that fall along the same plane, entirely by design. Up top, a narrow windshield punches a hole in the wind to form the pocket for the rider and protect the instrument cluster that includes a TFT screen display and a handful of idiot lights that covers all the bases. The display itself gets a buff in MY2018 with an easier-to-see screen and streamlined menu navigation, and it also serves as an interface that allows you to access and tailor the various ride-control systems.

In profile, the MS 1260 displays the typical high fuel hump and high pillion platform with the pilot seat nestled in the swale between. This puts the rider in the bike more than just perched on it to leave the pilot’s derrière well-ensconced with room for most to be able to operate the bike from a standing position for technical work. Though the seat has a narrow entry where it meets the waist, it flares out nicely to form a full butt bucket and carries that width all the way back for a generous pillion pad complete with J.C. handles.

An LED taillight fills the gap between p-pad and rear fender with a subframe-mount mudguard/plateholder and two huggers to manage the fling from the rear wheel. All-in-all, the MS 1260 manages to achieve a sense of graceful flow from head to toe; no mean feat for such a utilitarian genre.

Ducati completely reworked the steel Trellis bones for this new generation. First off, the whole shebang was stretched by 2.2 inches due to the extra 1.9 inches on the single-sided aluminum swingarm and extra degree of rake that pushes the front end out to a total of 25 degrees with 4.37 inches of rake. Those numbers indicate a ride that is a tad more stable than the previous gen, but not too much, so it remains at the sporty end of the handling spectrum in spite of the adjustments.

Symmetrical 17-inch wheels round out the rolling chassis with blackout Y-spoke rims and Pirelli’s Scorpion Trail II hoops with “open rail” and “open channel” features for strong traction with deep lateral grooves to help shunt water away from the center of the tread. Sure, it has some light off-road capability as well, but the weather-worthiness is the big selling point here.

KYB supplies the front suspension components with a set of usd 48 mm stems that float the front end on the full spectrum of adjustments while the Sachs monoshock supports the rear end with the same full selection of tweaks and a remote spring-preload adjuster for easy access with clean knees.

Dual 320 mm discs work with four-pot, monobloc calipers from Brembo up front with a 265 mm disc and twin-piston anchor out back, but the star of the show here is the cornering ABS feature that comes with the standard equipment package. It measures lean angle and G-forces in the turn, then uses the data to adjust its level of interventions taking into account the need to split the available traction between steering/tracking and braking forces. Nifty, but no substitute for proper riding techniques and caution

Tubular steel members make up the semi double-cradle frame that comes set up to resist the forces involved in carving the corners, and a yoke-style, two-side swingarm completes the standing gear

The beating heart is one of Ducati’s L-twin powerplants that features all the things the marque is famous for. Riders can expect a whopping 158 ponies at 9,500 rpm on top of the equally impressive 95.5 pounds o’ torque that peaks at 7,500 rpm.

A Ride-by-Wire system indirectly controls the elliptical, 56 mm throttle bodies with Ducati’s Traction Control and Wheelie Control features that weigh in with variable levels of intervention based on user settings.

These features go a long way toward improving the overall stability, regardless of rider ability, so even though I’d never call it an entry-level bike, I will say that it should be very forgiving of inexperience. You can even dial down the power with the Riding Mode feature; the Urban setting limits output to 100 horsepower for a more manageable animal when you’re in civilized surrounds.

A 106 mm bore and 71.5 mm stroke gives it an actual displacement of 1,262 cc with a smokin’ hot, 13-to-1 compression ratio, so you can go ahead and forget about burning anything less noble than the most expensive pump gas. The four-valve heads come with Duc’s signature Desmodromic valvetrain that replaces the return spring with a pull-closed cam that provides a positive means of closure that isn’t vulnerable to float due to harmonic vibrations so it’s safer than the average bear at high rpm.

Dual-plug heads ensure positive flame-front propagation for power and emissions with a catalytic converter to help burn off any free hydrocarbons that make it into the exhaust stream during valve overlap. Power flows through a six-speed transmission via slipper clutch that gives the control a light touch and provides another layer of traction protection.

Ducati Multistrada 1260 offers an impressive mileage of 19.23 kmpl and the top speed of 239 kmph