BMW Motorrad is one of the leading automobile manufacturers in the world which is known for performance, premium build quality and unparalleled riding experience. BMW is now officially a thing in Nepal. They have announced 2 BMW Motorcycles (BMW G310R and G310GS) with 3 variants each. The launch event was held at Hotel Yak and Yeti. Himalayan Motorrad is the official distributors of BMW Motorbikes in Nepal. The price of BMW G310R in Nepal is Rs. 9,50,000.

G310R sports a 313cc single-cylinder liquid cooled unit that produces 34PS at 9500rpm and 28Nm of torque at 7500rpm. Suspension of the bike consists of upside down front forks and a rear monoshock. Power to the entire bike is transmitted to its rear wheel through a six speed gearbox. The G310R tips the scale at 158.5kg. BMW claims a top speed of 143kmph and combined fuel efficiency of 30kmpl for the G 310 R. The bike gets a tubular steel frame with 43mm upside-down front forks and rear monoshock damper. 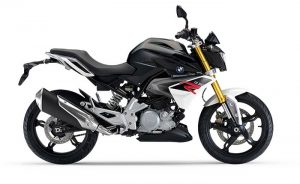 In terms of the overall design, the bike inheritates from the predecessor model BMW S1000R series. The bike has been designed to unveil the sense of aggressiveness with the major concentration being given to the front end. At the same time, the stubby tail of the sports a sense of lightness. Its well-sculpted tank of the bike along with its distinctive and angular tank shrouds indicate the design features of the bike model BMW S1000R. The BMW G 310 R features an all-digital instrument console known for reading the essentials including speedometer, odometer, tachometer, gear indicator, trip meter, and so more.

It gets 17-inch alloys wrapped in 110/70 R17 front and 150/60 R17 rear Michelin Pilot Street radial tyres. Braking is via a single 300mm front disc clamped with radially mounted calipers and a 240mm rear disc. It gets dual-channel ABS as standard. The roadster G310R bike has a fuel tank capacity of 11 Litres. After being launched, the G 310 R by BMW will be competing against the models like the Bajaj Dominar 400, KTM 390 Duke, the Benelli TNT 300, and the Mahindra Mojo XT300 bikes.

You may also check out about BMW G310GS. Here!!